“The pharaoh, the savage and the princess”: the marvelous of Michel Ocelot

From the kingdom of Sudan 3,000 years ago to Morocco in the 18th century, passing through the executioners of the Middle Ages, the French director and screenwriter Michel Ocelot digs into the past of tales, draws inspiration from them, reworks their plots. in The Pharaoh, the Savage and the Princess, an animated film that highlights the scriptwriter’s rigor.

“Storyteller, what story are you going to tell us? — The one you want, answers the artist to an audience eager to escape reality. Faced with the many proposals launched by the assembly, the storyteller (Aïssa Maïga) collects ideas, which quickly take the form of three short tales which she relays. First there is The Pharaoh, a story freely inspired by a text inscribed on “The Dream Stele” (7th century BC) and which evokes the reconquest of Egypt. Ocelot uses this context, from which he embroiders a love story, that of a conqueror, Tanouékamani (Oscar Lesage), who becomes pharaoh in order to be able to marry Nasalsa (Claire de La Rüe du Can), overprotected by a rigid mother (Annie Mercier). Although predictable, as most fairy tales are. 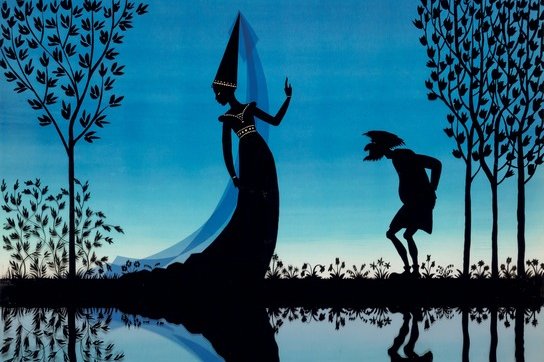 In Le beau sauvage, Ocelot is inspired by the “Tale of the beautiful savage” which appears in Le Trésor des contes, by Henri Pourrat. A child (Gaël Lesage) is chased away by his ruthless father (Patrick Rocca) for freeing a prisoner. He grew up in the forest and became a Robin Hood, this “beautiful savage” (Oscar Lesage) who succeeded in everything.

Finally, The Princess Rose transports us to the shores of the Mediterranean, to 18th century Morocco, where a resourceful princess (Claire de La Rüe du Can) and an enterprising prince (Bruno Paviot) defy rigid laws and build their own story.

In order to immerse the spectator in the particular atmosphere of each of the tales, Ocelot imagines three graphic universes which participate intimately in the creation of atmosphere. Egypt is recognizable by several clichés, in particular the absence of perspective in the drawing, the profiled characters, the opulence of the pharaohs or even the gods Khnum, Osiris or Amon, which do justice to the tale.

To highlight the Middle Ages, the draftsman opted for gray stone and characters presented in black shadows, which weighed down the atmosphere and evoked the harshness of this era of executioners.

And, naturally, we switch to the third story, under the azure sky of Morocco, at the public market, where watermelons, cinnamon donuts, Armenian skewers, Bulgarian yogurts, currants, Turkish delights and other delicacies parade under our eyes. eyes and whose perfumes you can almost smell.

Kirikou’s father is not only an excellent storyteller, but also a documentary filmmaker who helps enrich the culture of children by digging into ancient texts here. However, it will be criticized for a few stereotypes, in particular the staging of beauty – princes and princesses are aesthetically perfect – as well as love relationships that are just as predictable. But entering the world of fairy tales is also adhering to reality, however sublimated it may be, that we are offered.