The decline of ‘Fortnite’: it loses 40 million players and is no longer the most popular

Fortnite has been one of the most popular video games in the world for the past few years. It has shared the podium with titles like Minecraft and Grand Theft Auto V, but all great success stories come to an end at some point.

A large part of Fortnite users firmly believe that this moment has arrived for the Epic Games video game, which, in recent months, has been losing players in a constant and sustained manner. But is this really the end of Fortnite?

Answering this question requires a lot more factors than just the number of active players to consider, but this is a good starting point. According to the specialized website activeplayer.io, Fortnite currently has 30 million active players every day. This translates into an average of 250 million monthly players, a number that differs substantially from the 290 million that played in May 2021. At first glance, the figures do not seem very different, although there are practically 40 million users between one and the other. , something more than the entire population of a country like Poland.

May 2021 marks the peak of one of the best eras of the Epic Games video game. At that time, Fortnite was practically four years old – it was officially launched in July 2017 – and it was taking advantage of its great popularity to make collaborations with all kinds of franchises and famous characters fashionable. It was the time when Season 6 of Chapter 2 was being played and figures such as the soccer player Neymar Jr. and Lara Croft from the Tomb Raider video games came to Fortnite.

If you put the magnifying glass on that specific moment and then sweep through the following months, the statement “Fortnite is dying” can make some kind of sense. But it only takes a small increase in the study sample for the conclusions to change drastically. According to the same player count website, in November 2020, Fortnite had an average of 210 million monthly players, 30 million less than the current figures.

Neymar Jr is the new playable character in Fortnite.

Throughout its entire history, starting in July 2017, Fortnite’s player graph hasn’t been an ever-rising straight line. Depending on the seasons, collaborations and updates, the number of users has fluctuated, always reaching a maximum of almost 300 million monthly users on average. It is true that the battle royale from Epic Games is not at its best, but it is still too early to publish its obituary in the newspapers.

Viewers on Twitch: another side of the same coin

The other main indicator used by those who claim the death of the game is the number of viewers on Twitch. This time, it’s time to resort to the statistics of the Twitch Tracker website, which support the forecasts of the most ominous. Since around July 2018, the following trend on Twitch has been downward. Between late 2019 and early 2020, Fortnite suffered a major drop off on the purple platform and picked up as summer 2020 approached. Since then, it has been losing followers fairly steadily. 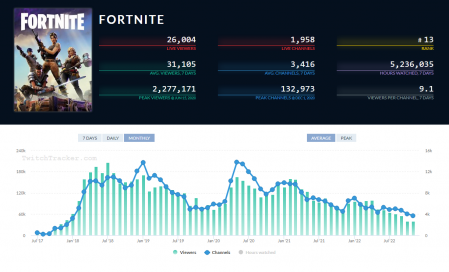 This sustained drop in the number of viewers is also due to the loss of interest from streamers. Big content creators, like TheGrefG or DrLupo, have stopped playing Fortnite daily. Currently, the Epic Games game ranks 14th in the list of most viewed categories on Twitch, below titles such as Call of Duty: Warzone, Valorant, Minecraft, GTA V or League of Legends, among many others.

Some figures seem to support the most dire forecasts, while others make the current situation of Fortnite normal. But reality is not black or white and simply thinking about the death of the game is to pose a false dichotomy between success and absolute death. Epic Games continues to bet on Fortnite. This coming Saturday, December 3, Chapter 3 ends and the developers are already preparing the launch of Chapter 4 with a new map and many new features. During this 2022, Fortnite has had some of its most outstanding collaborations, such as Dragon Ball, and great streamers like Ninja (Tyler Blevins) have returned to the game.

It is true that Fortnite has already passed its peak of popularity. With more than 350 million registered users, it is difficult to find players who have not gone through this battle royale. In addition, after almost six years of experience, a point has been reached in which the distance between newbies and veteran players is so great that a very high barrier to entry has been raised, which puts many new users back.

But Epic Games is aware of all this and is still working to fix the issues that the game is facing. The traditional battle royale mode may be too difficult for new players, who are not skilled enough to shoot and build at the same time and pace as the veterans. Well, faced with this problem, the developers decided to launch a game mode without construction: Fortnite Zero Build. This has made it possible to attract a new audience, burnt-out players looking for new experiences, and even content creators. 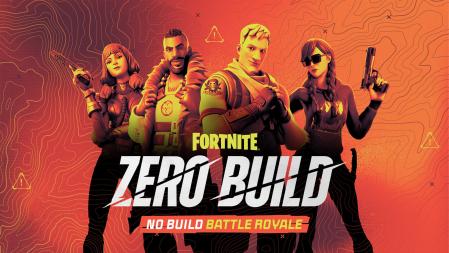 Fortnite may not be in the Top 5 of the most popular video games of the moment (or even in the Top 10, according to Twitch). But to what extent can it be said that a game with 250 million monthly users is dying? How many titles reach these figures? For now, at Epic Games they have not given up and continue to work to keep Fornite relevant. Next week Chapter 4 will be released and we still have to discover what great collaborations will come soon to the battle royale. Fortnite is not dead yet.